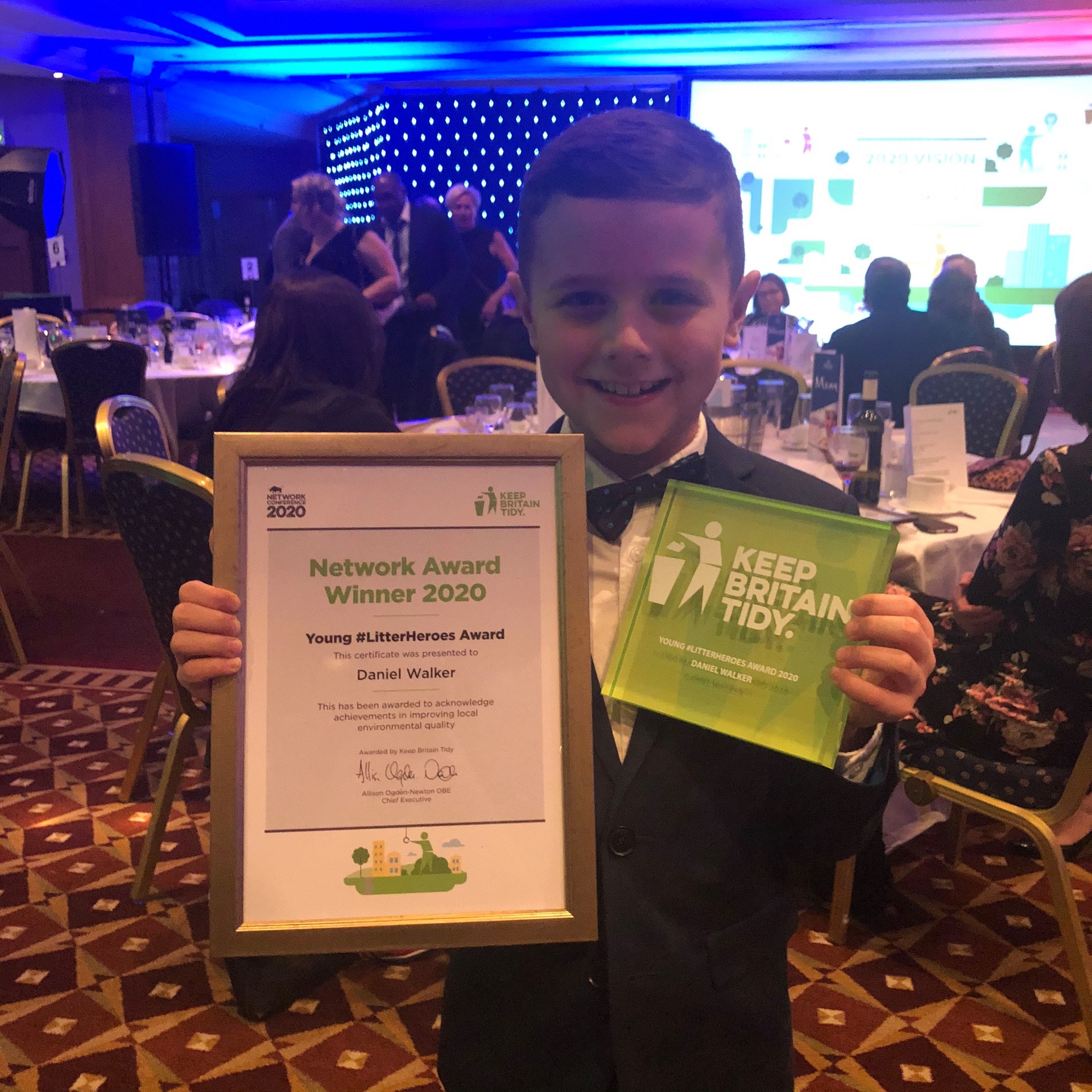 Beating off stiff competition from local authorities across the country, Daniel Walker, an inspirational eight-year-old from Great Notley in Braintree, was presented with the Young #LitterHeroes award at this year’s national Keep Britain Tidy Awards ceremony in Birmingham last night (Thursday 6th February 2020).

The awards celebrate the very best councils, and those who are making significant improvements to the environment on people’s doorstep.

He was nominated by Braintree District Council for the prestigious award in recognition of his exceptional efforts for tackling litter in his community.

Daniel has become well-known for his actions that are encouraging others to change their behaviour and attitude towards litter, educating people on the harmful impact of waste on animals and all whilst raising money for the Farleigh Hospice charity in memory of his Granny. Daniel has also hosted presentations at his school, encouraging classmates to also take an active role in the environment and helping to tackle the litter problem.

Councillor Wendy Schmitt, Cabinet Member for Environment and Place at Braintree District Council: “Daniel is a true role model and at just 8 years old, he’s a real testament to all our Green Heart Champions who give up their time to clear rubbish from our streets, so we are absolutely delighted he has won this year’s Young #LitterHeroes award. This national award recognises those in our communities who make an outstanding contribution to helping the local environment and reducing litter, and we could not think of a more worthy winner than Daniel.”

Keep Britain Tidy Chief Executive Allison Ogden-Newton said: “I would like to congratulate Daniel Walker on his well-deserved win. Young people have been at the forefront of environmental campaigning in the past 12 months and Daniel has shown that there are some young people out there who are making a real difference in their communities. These amazing children give us hope for the future and are inspiring others to follow their lead.”

Natalie Walker, Daniel Walker’s mum, said: “Daniel’s achievements are a real testament to how one tiny action can lead to great things. The recognition of the Young Litter Hero award from Keep Britain Tidy has been an amazing achievement and we continue to be so proud of Daniel’s actions.”

Maz Keenan, Community Fundraiser at Farleigh Hospice, said: “We are delighted to hear that Daniel has continued his good work and gone on win the Keep Britain Tidy award. He is an inspirational young man – from such a simple idea of helping to keep his local park tidy he has kept on giving to his local community. His family have encouraged him and as his Granny was cared for by Farleigh he chose to raise money for the hospice whilst continuing with his litter picking. This wasn’t just a one off act of kindness as he has continued to litter pick even now he is back at school and he has continued to fundraise – we need more young people like Daniel who shows such compassion for both his local environment and his local community.”